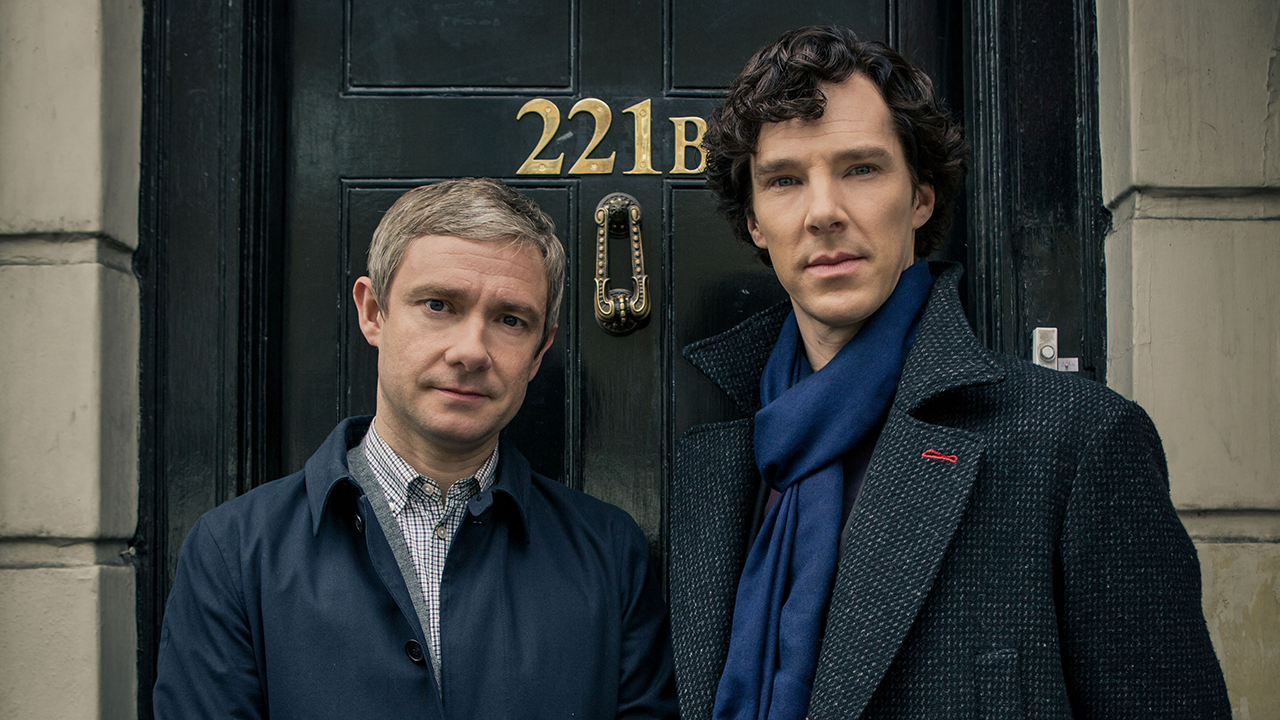 The character of Sherlock Holmes has been brought to life many times via film and television. Being that I am a sucker for detective shows, I usually find myself enjoying whatever version of Sherlock Holmes comes my way. That said, Benedict Cumberbatch has become my favorite version of Sherlock Holmes. I can't necessarily say that BBC's Sherlock is the best Sherlock Holmes show ever created because I haven't seen them all, but I can say that it's my personal favorite. I can also say that Sherlock is one of the best shows currently on TV. Season 2 left us all on a painfully awful cliffhanger that was made worse by us having to wait two years to find out what happened next. Well, the long wait is over. Sherlock season three has arrived. And I have to say, it did not disappoint.

There are a lot of things that Sherlock does right. Starting off is the cast. Like I said, Benedict Cumberbatch is my favorite Sherlock Holmes. The man is a legend in my books for his perfect representation of the character Sherlock Holmes. He gets Sherlock's mannerisms and personality right on. And of course his acting skills are top notch. Ever since Sherlock started, I have been in love with that man's acting. Every role he plays is brilliant. However, Cumberbatch isn't the only brilliant character. Martin Freeman plays Sherlock's partner John Watson. The chemistry between the two of those two are brilliant. Those two alone make the show worth watching. 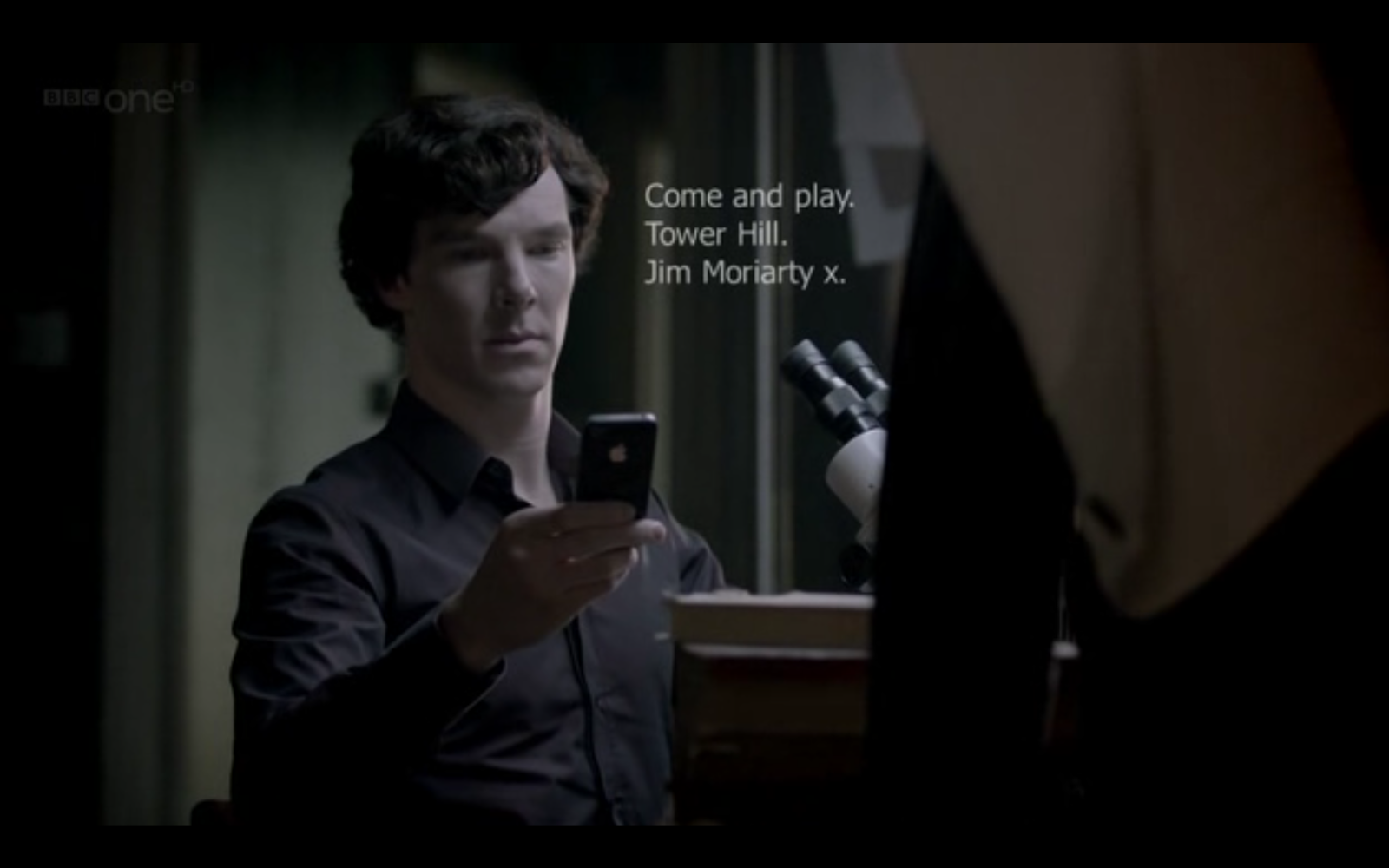 But that's certainly not all. Yes Cumberbatch and Freeman are both genius, but I give props to the casting on this show in general because I really think every character, major or minor, is perfect. In addition to that, the writing on the show is genius. I suppose that at least part of that has to be attributed to the three episode season format. Instead of having to write 13 or 24 episodes, they can focus all their effort into making three fantastic hour and a half episodes. But it's not just that. The plot lines are great. The suspense, drama, and comedy is perfectly balanced to create an all around beautiful experience. Also, the visual style of the show is great. With that I refer to both the way they show the texting and the way they show Sherlock's brilliant mind deducing each situation in depth.

All this that I have mentioned is a review of the series as a whole. I have not yet put my thoughts on this to writing, so I felt it needed to be done. Season three continues the brilliance of the show in these ways that I have mentioned. Now that I have spoken in general about the show, I want to actually dive into each episode in season three, since there is only three episodes. I will give no spoilers, but if you have not yet seen season three and you want to go in with a complete surprise, knowing absolute nothing, feel free to stop reading here and just know that I really loved season three. It may not be the absolute best season to date, but that's ok. I still loved it. Anyways, for those who want a more in depth review, feel free to continue reading. 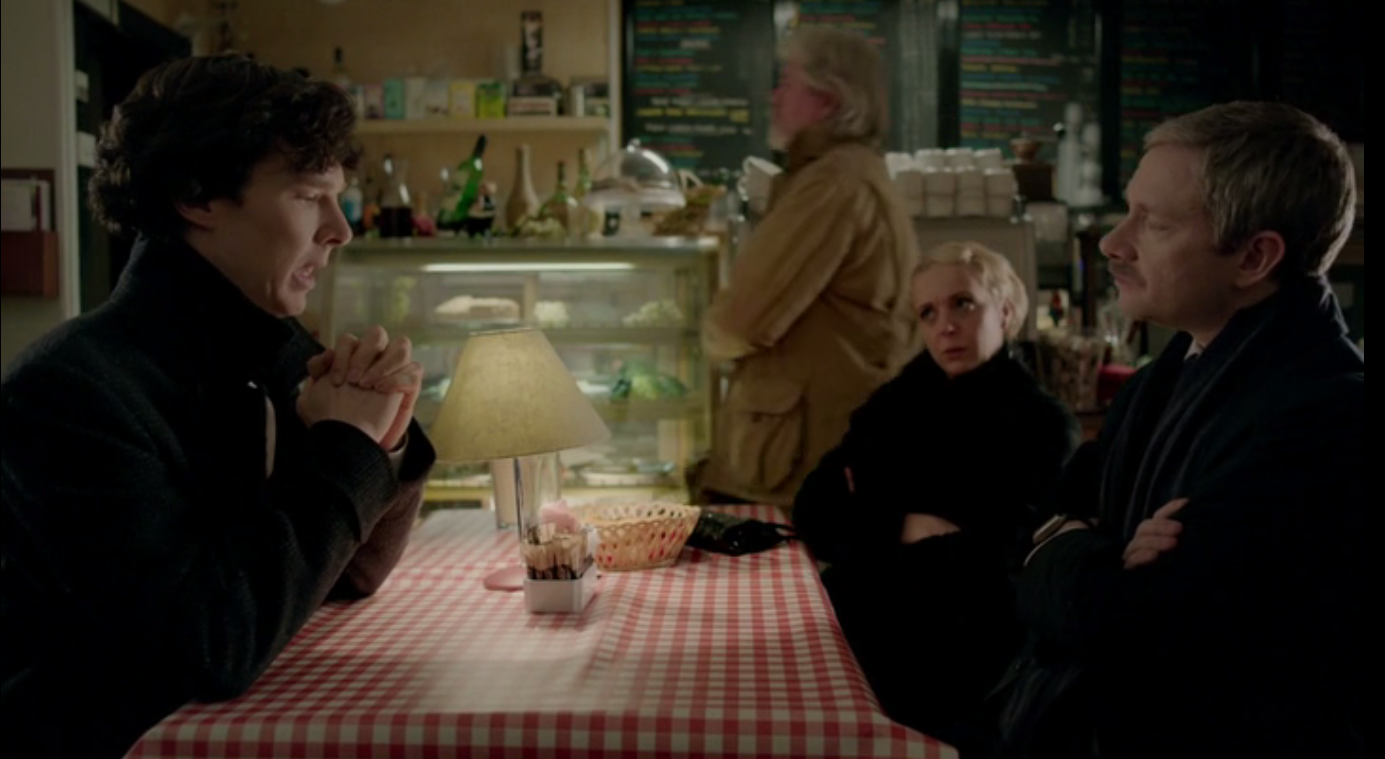 This episode was super satisfying to me. I had been on a Sherlock fast for way too long and it was super good to have it back again. It's like if you were given a delicious cheesecake and at first you indulged yourself pretty heavily. However, after a few slices, the cheesecake was taken away from you. You were informed that you could have more later, but just not anymore right now. Knowing that there was more cheesecake out there for you to eat would torment you until you were finally given permission to indulge yourself once again. That's how this was for me. Sherlock had been gone for so long, and mind you it had left on a horrible cliffhanger with the season two finale, that I was just happy to have it back.

If you haven't seen the season two, I won't give away what happened at the end, but this first episode put my mind at ease. Funny enough, the cliffhanger wasn't actually completely resolved for sure, but I was given possible ideas about how it could've been. Despite the continued tease, that was refreshing. Now I talk about the chemistry between Watson and Sherlock being fantastic, and that was the strength of this episode. Sherlock has been gone for a long time and Watson had moved on. Sherlock has now reappeared into Watson's life, and with the lack of people skills that Sherlock has, he expects things to be fine and dandy. They're not. Watson's reaction to Sherlock returning in this manner is rather priceless. But nonetheless, there is a terrorist threat in the city of London and Sherlock needs Watson's help. It's a classic Sherlock episode that starts the season off with a bang. 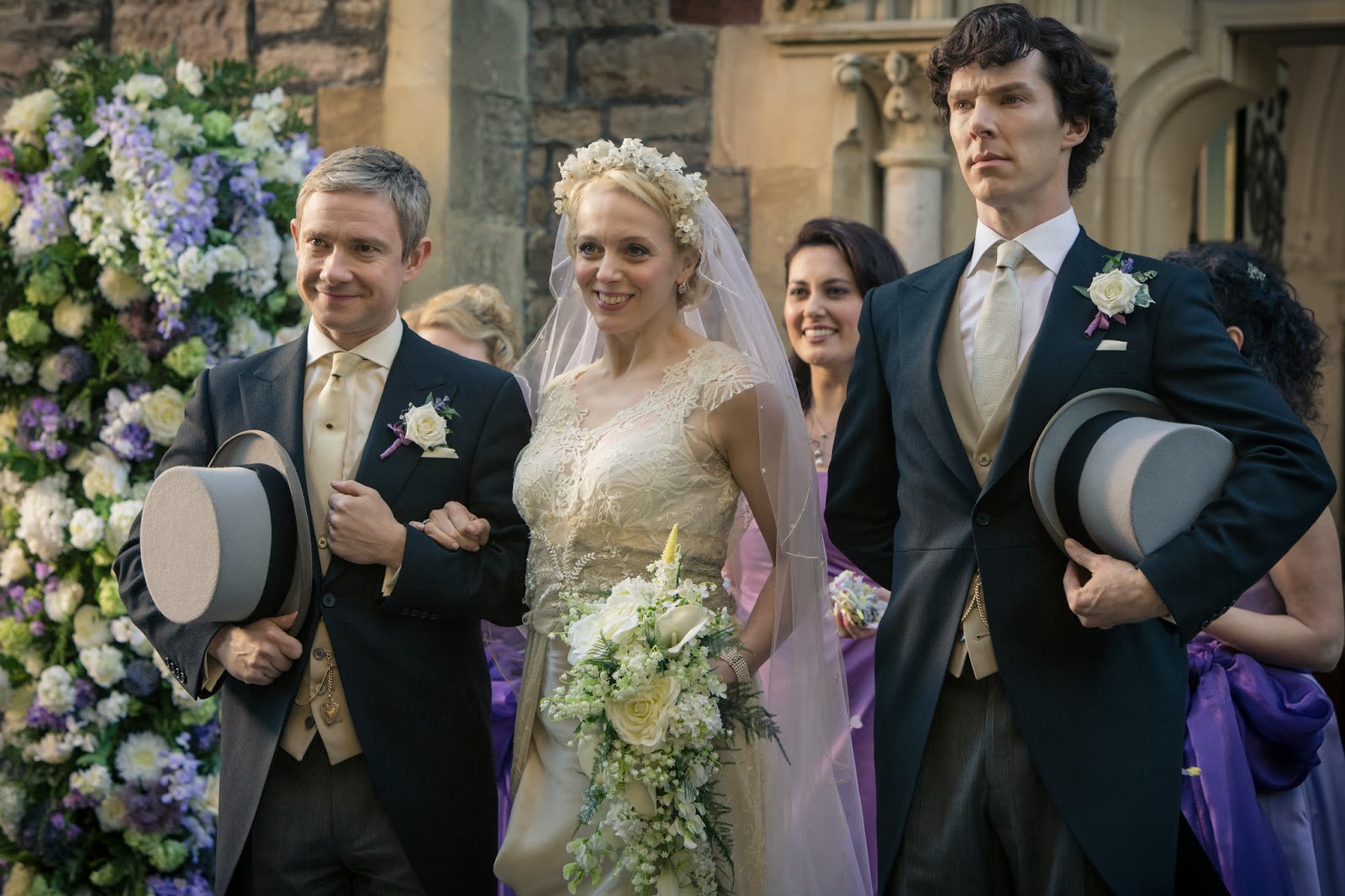 As is the case with seasons one and two, the middle episode of season three is the weakest of the bunch. That's not really an insult, though. It's still enjoyable. But logically with three episodes, the first episode is going to try to be the attention getter and the third episode is going to leave things off with a bang. This leaves the middle episode as the transition episode. That's what happens here. The story of the episode comes with Watson getting married. Sherlock is asked to be the best man and thus has to give the speech. This is actually super comical. Sherlock isn't a social person and he doesn't know how to give a best man's speech. It's great watching him stumble through it. The episode actually started off super slow and for a long time I was wondering what exactly was going to happen. I won't tell you what happened, but I will just say that this is a very unique episode. I understand why some people may not like it, but thinking back on it, I actually really like the creativity and uniqueness of the episode, even though it wasn't the best. 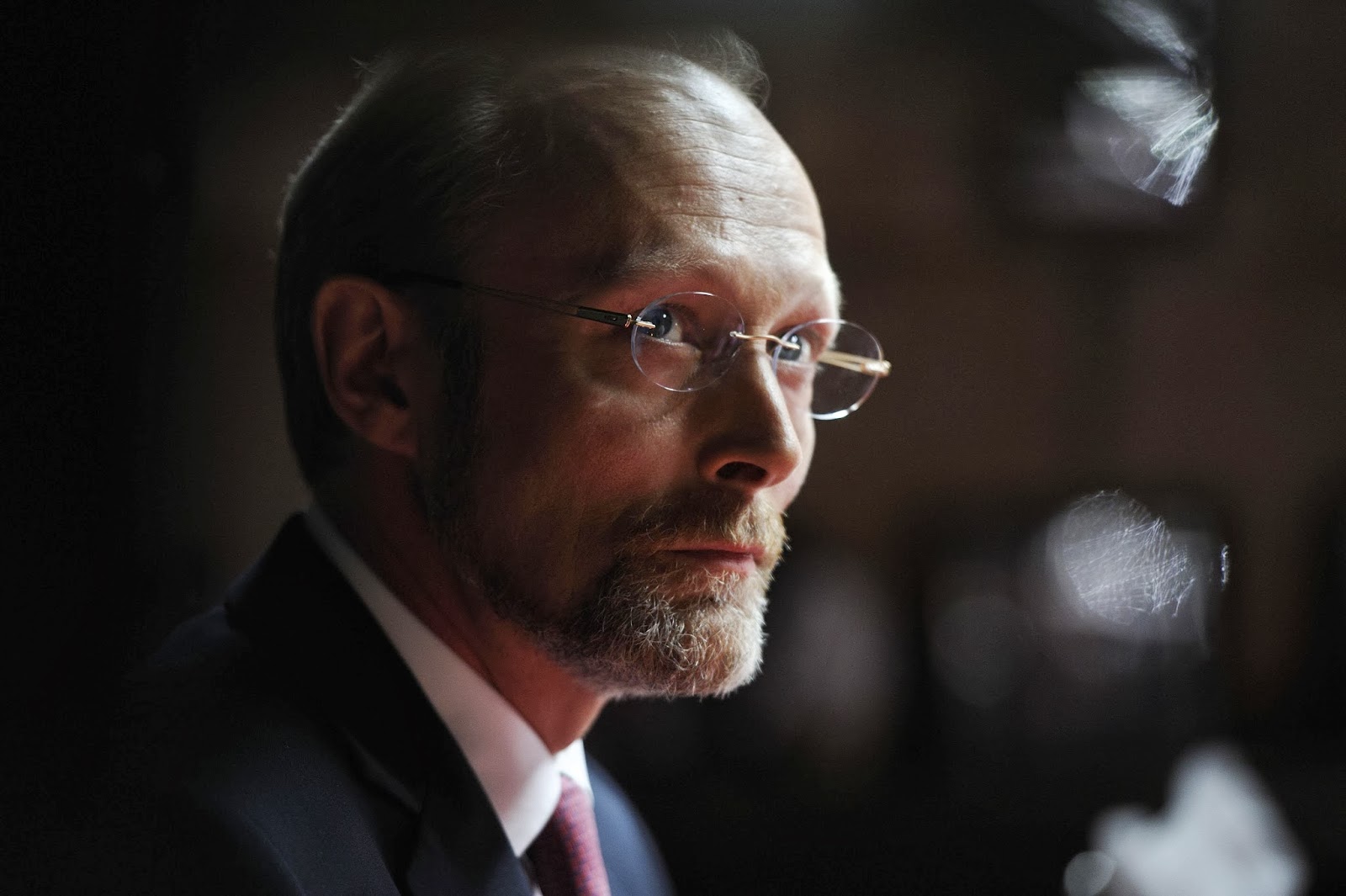 The finale of season two completely blew my mind. One of the best TV episodes ever made. Since there was about two years in between the season two finale and the season three premier, I literally spent months reflecting on that episode. The season three finale makes the attempt to be as epic as the season two finale. Does it match the season two finale? Well, no. But it's still fantastic and the best episode of season three. There are three things I really loved about the finale, and I'll try to be as vague and brief as possible so the experience is the same for you as it was for me. First off, we introduce a new huge villain for Sherlock named Charles Magnussen played by Lars Mikkelsen. His character was excellent. Second, there is a big twist towards the beginning that brings the intensity and emotion to a season high. I love the way all the characters dealt with it. And finally, there is a twist at the end that was genius. Many say they saw it coming. I personally didn't, but when it happened I wasn't surprised at all. Season two left me pulling hairs out of my head with how it ended. Season three didn't. But at the same time it made me super excited for the direction that they are going to take with season four.

Overall, I loved the first two seasons of Sherlock. I have been looking forward to season three for a very long time and I am happy to say that it lived up to the legacy of the first two. I usually give a grade to the movies I review, but I have never done so with TV seasons I review for various reasons. No, I'm not going to start now, but if I were to, Sherlock season three would get my top rating.  Not as good as season two, but about on par with season one. Rumors say that season four is coming sooner rather than later. I really hope that is true because my only real concern about Sherlock is that there isn't enough of it. I want more!
Posted by Adam Droge at 6:14 PM