Alice Through the Looking Glass Review 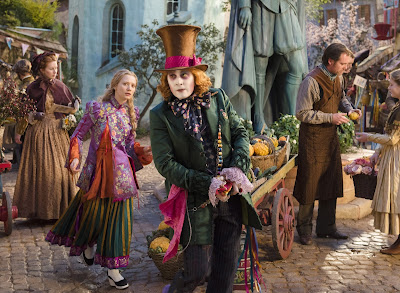 It's the sequel that no one wanted, but the one we got anyways because the first movie made $1 billion at the worldwide box office. It's baffling really. Like seriously, go look at the list of the 25 movies that have made at least $1 billion and try to find one in there that is more universally disliked than Tim Burton's Alice in Wonderland. Outside of maybe Transformers: Age of Extinction, you might actually come up empty. So how in the frack did it earn $1 billion when no one liked it? Simple. Disney had the absolute perfect timing with its release as it was the next big 3D adventure after Avatar revolutionized the cinematic experience back in late 2009. That's it. Disney got lucky. This time around, they didn't get lucky. Disney's first mistake was that they tricked themselves into believing people wanted this sequel. Second mistake was waiting six years to release the sequel. Third mistake was not realizing that no one cares about 3D anymore. Add in some poisonous reviews and poor word of mouth and your result is a movie that only makes $26.9 million on opening weekend, which is really bad considering its predecessor opened to $116.1 million. That's a 77 percent drop-off. Ouch. But is it really as bad as everyone is saying? Yes. Yes, it actually is.

When I first watched Tim Burton's Alice in Wonderland, I remember being lost, confused, and bored for most of the movie. The movie may have been visually impressive, but Alice herself was a dull character, none of the side characters were interesting, the plot was dull, and the evil queen was extremely annoying. The best part of the movie was when the dragon showed up at the end. I know they don't actually call it a dragon, but let's not fool ourselves. It's a dragon. Was the classic Alice in Wonderland really this bad or was this just a really pathetic remake/sequel thing? Most would go for the second answer, but I'm going to shock the world and say a little bit of both. You may have known that recently I re-watched all 55 of the movies in the official Walt Disney Animation Studios cannon and ranked them. Where did I put the original Alice in Wonderland? Bottom five. 50 out of 55. I didn't like it. Visually it's great and it has a lot of quotable lines, but the story is on crack. I'm half convinced that it's a movie about a little girl that accidentally came by some pretty hard drugs and thus went to "Wonderland" where there is absolutely no rhyme or reason. I know that wasn't the actual intentions of the story, but it fits. Surprisingly well. 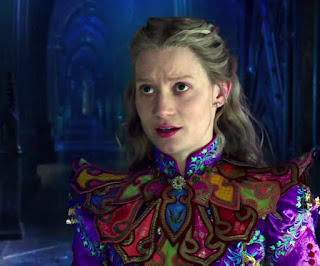 I'm not here to review the old Alice in Wonderland or argue about whether or not it's considered blasphemous to hate on a "classic," but I figured you should probably know my history with the franchise before we discuss this sequel so that you know where I'm coming from. Perhaps that means I'm not the most qualified to review an Alice in Wonderland movie if I've never enjoyed a movie or a story from that universe, but if you're reading this review that means you're here for my opinion and I'm going to give it to you. Honestly I got exactly what I've learned to expect from an Alice in Wonderland movie with Alice Through the Looking Glass. Visually impressive. Quotable lines. Horrible plot. I suppose we call it Alice Through the Looking Glass because Alice jumps through a mirror and returns to Wonderland. Not a very descriptive title if you think about. It tells us nothing about the movie. It just tells us how she gets back. I have a better title for this movie. Alice in Wonderless Land. Because Wonderland is boring this time around. The Mad Hatter is more like a Sad Hatter and the rest of the world is depressed because he is depressed. So our whole story is to try to make the Mad Hatter happy again.

Let's back up, though. When we start the movie we learn that Alice is actually a sea captain. I don't know why, but she is. The only application I see to it is that because she was a sea captain, she is able to flawlessly fly the time machine that she gets later on. Because yes, Alice Through the Looking Glass is a time-travel movie. Why? Because the Mad Hatter is sad about his family dying. When Alice goes and talks to him, he has a slight glimmer of hope that maybe she can help save his family and yet she responds to this by becoming the jerk of the century and crushing all of his hopes and dreams. "That's impossible," she tells him, despite the fact that she gave us an "everything is possible" speech not too long beforehand. Now the Mad Hatter is dying and five seconds after ruining his life, she learns that she can time travel through Wonderlessland by talking to Time himself. Except Time doesn't like her idea, so she steals his time machine anyways and starts on this journey through time to save Mad Hatter's family with Time chasing her. I know this sounds like I am giving away the whole plot, but I swear this is just the first part of the movie. If it sounds completely ridiculous, it's because it is. Yet all this would've been prevented if she had just been nice to her friend. Stupid Alice.

Despite it seeming like the whole crew was on drugs when they came up with this screenplay, the other horrible part of this story for me was that it was insanely predictable. I'm not going to give away anything that happened in the second half of the movie, but there's a few introductory quotes in this movie that essentially give you a road map for what's going to happen. Following introductory quote, said character says something exact opposite of that quote, but yet is off to do said thing anyways. Other said character tells said character that said thing can't be done and if said character tries, said thing will actually happen. Once all of this starts to happen, I was sitting there in my seat thinking to myself that certain things will happen like this, this, this, then this. And boom! It was as if I was in the board room while screenplay discussions were happening because the whole freaking movie turned out exactly as I thought it would once they got the ball running. That made this an insanely boring journey because I swear it took us over an hour to get from point B to point C in the movie when the whole thing could've been done in 10 minutes or less. This whole segment wasn't even trippy and weird like Alice in Wonderland is supposed to be. It was just trudging through boring Wonderlessland following a cookie-cutter storyline. 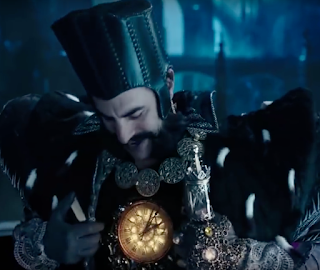 Continuing what Tim Burton started with his Alice in Wonderland, in addition to a horrible plot, this movie had horrible characters. One good thing about the old, animated Alice in Wonderland is that the characters were actually interesting. This one they're not. Mia Wasikowska as Alice looked bored throughout the whole movie. That made our title character of the story dull, bland, and uninteresting. Not a good sign for your movie as a whole. The Mad Hatter is not mad. He's sad and depressed for 90 percent of the movie, which is boring. Our classic side characters are useless. Ann Hatheway as our pale queen stands around doing nothing for most of the movie. Helena Bonham Carter's crazy psychopath queen of hearts character is back and even more annoying as ever. I hated her in the first movie and her scenes in this one were almost cringe-worthy. It was great hearing Alan Rickman's voice again (the world needs that man back -- RIP), but I swear he only had two lines. Moriarty from Sherlock got a cameo in the movie. That's it. All the males in the normal world are sexist to the extreme. I know they had a purpose to that, but I felt like they were beating me over the head with it. I get it. Girl power! Now do it in a believable, more emotional way next time instead of being cheesy and exaggerated.

The one good character? Time. He's played by Sacha Baron Cohen. Normally I'm not a huge fan of Sacha, but in this case he's the only actor in the whole movie that looks like he's trying to pull off a good performance and thus is the only one that I bought. They tried to do some character arcs with plenty of other characters, but in every other case it was either written poorly or the actor/actress looked like they were only there for a paycheck. But Sacha pulled it off and his character arc was good. Speaking of Time, there were so many time puns scattered throughout the movie and they actually cracked me up. It wasn't enough to save the movie, but it provided some much needed humor that made it so I didn't feel like I was in prison. Speaking about other good things, visually the movie was phenomenal. And the soundtrack was excellent. I actually saw this movie in 3D IMAX and that was a real treat. Not necessarily the 3D part of it. That was totally useless, which was disappointing because that's the only reason why the first movie made money. But the IMAX part was great. I wouldn't go out of my way and spend big bucks for an IMAX ticket, but if there's a sweet IMAX deal at your local theater on a certain day like there is for me, then take advantage of that.

That's really all the good I can take from this, though. It's a visual treat with a good soundtrack, but the characters were mostly all dull, except for Time, and the story was a big, huge, predictable mess. It was about as cliche as you can get with a surprisingly boring Wonderland. If you are like me and you didn't like the animated classic or Tim Burton's 2010 live-action remake, then there's no reason for you to see this. If you loved the animated classic, but hated Tim Burton's remake, then there's also no reason for you to see this. If you loved the animated classic and loved Tim Burton's remake, then I can't speak for you. But it is worth noting that I did have a friend or two with me from that latter category who also found the movie disappointing, so there's no guarantee for you either. Financially speaking, I knew this movie would fall off from its predecessor, but I still thought that it would get an opening weekend around $50-$60 million and end up around $175 million domestically. But $26.9 million? Yikes. That's with a production budget of $170 million. Don't mourn for Disney, though. They've already passed $4 billion with their other movies this year. Just be glad that this failure means there will be no third movie. We're done with Wonderland. My grade for Alice Through the Looking Glass is a 5/10.
Posted by Adam Droge at 11:52 AM