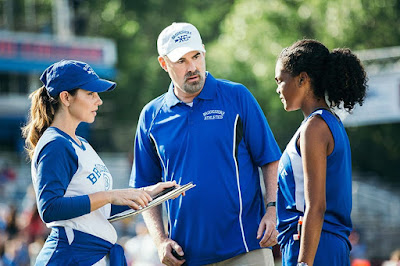 The Kendrick Brothers are back with what is now their sixth feature-length film, this one following "Flywheel," "Facing the Giants," "Fireproof," "Courageous" and "War Room." Not once in this movie's marketing campaign was I actually excited to see this, and thus I almost skipped it. But then I remembered that I have a lot of friends who have enjoyed plenty of their movies and might be interested in what I think of this latest additional to their filmography, so I submitted myself to seeing this one. The Kendrick Brothers' films have a lot of issues that I will dive into, but the biggest underlying issue is that they always paint a black and white picture of reality while steering far clear of any semblance of a complex issue. If life sucks, then turn to God and life will get better. While that's a fine sentiment, the reality is that sometimes life still sucks when you turn to God. What then? I'd love for them to tackle that issue, but they never do and thus I've gotten increasingly annoyed with them. While that's not as damaging as something like "God's Not Dead" treating every non-believer as a child of Hell, the unrealistic sentiment that they keep pushing in their films is still not very helpful. They might be harmless films, but they leave me feeling empty and uninspired.

And that is only introducing the basic message. The quality of the filmmaking is a whole different story. Their early two films, "Flywheel" and "Facing the Giants" are harmless enough on their own, and not terrible films. But they seem to have gotten worse over time. "Fireproof" is one that I barely remember. The only thing that sticks out to me is that the movie seems to think that bashing your computer with a baseball bat is a good way to overcome a pornography addiction. That aside, it's full of overacting and a bunch of nonsense. "Courageous" was as boring as tar with way too many story arcs and a run time that felt an hour too long. And "War Room" was so bad that I was laughing hysterically at several points, while also being a bit disturbed that the movie thinks that all your legal troubles are going to magically disappear if you have faith in God. The main actor should've been in prison at the end of the movie, but they didn't think too hard about that one. And "Overcomer"? Well, it has a few redeeming elements that make it not quite as bad as the previous three, but when it comes to pure filmmaking, this is a pure disaster. The movie has no idea what it really wants to be and comes with the most generic title that I've seen in a Christian movie. 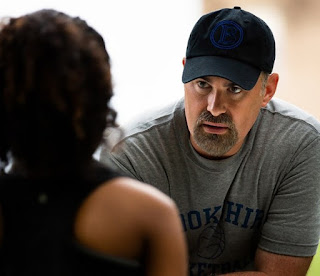 So what is that they are overcoming in this movie? Well, that's a good question. I guess they're overcoming a lack of faith, which means the title "Overcomer" could describe every one of the Kendrick Brothers' movies. But specifically this is a cross country movie. Kind of. Alex Kendrick, who is the director of all of these movies, and the lead star in most of them, plays a basketball coach who has a lot of hope about the upcoming season after suffering a sad loss in the final game of the current season. But then something happens in the city that causes the school to loose a huge percentage of its students. What is said thing? I actually don't know. They jumped over it pretty quickly, but due to some sort of random plot device that makes no sense, a lot of families are moving out of the city. Jump five months into the future, right before the start of the next school year, and Mr. Kendrick is asked to be the cross-country coach, because apparently his halfhearted, generic speeches to his basketball team is enough for the principle to think he's the right man for the job, even though he has no idea how to coach cross-country and never really makes an effort to learn how throughout the movie. But when tryouts come, he has only student tryout, but they go forward anyways.

That's what our movie is like for the first portion of it. There's not even a mention of "faith" or "God" until much later on. We're just a cross-country movie. So I decided to judge it on it being a sports movie. Granted, sports movies can be formulaic and predictable because there's not a whole lot of avenues you can go with them, but this movie doesn't commit to anything here. As a sports fan, if you at least put some sort of effort into following the sports movie formula, I can be entertained. But in this movie, they just run. The lone student of the bunch is a girl named Hannah. There's not really much progression with her and her running abilities. There's just a bunch of disconnected sequences with her running and magically getting better even though Mr. Kendrick doesn't do much coaching. In between Hannah's runs, he's complaining about basketball, being dragged into drama class stuff, talking with his wife, complaining about how rough life is at the moment, then we'll randomly cut back to a scene of Hannah running. So this is a kind of a sports movie. But they really just use the cross-country stuff as a backdrop to everything else. They don't commit to it. If you want a good cross-country drama, go watch "McFarland, USA" with Kevin Costner. It's pretty good.

After only half committing to the cross-country angle of the movie, our first mention of religion comes when Mr. Kendrick's wife tells him he has a visiting assignment with the pastor at the hospital. In the midst of that, he literally accidentally stumbles into a different patient's room. That patient just so happens to be Hannah's dad, who Hannah was told by her grandmother of whom she lives with was dead. Mr. Kendrick actually only goes back because Hannah's dad is also a runner and gives him tips as to how to coach, which he doesn't do a good job of implementing. But eventually he figures out who he is and then the next portion of the movie becomes a drama where Mr. Kendrick and his wife try to figure out how to break the news to Hannah that her dad is still alive, despite the fact that grandma is adamantly against it. They decide to go around her, which seems dumb, but whatever, and the movie then becomes a father/daughter drama that lacks in interesting drama. It wasn't all that interesting and things just sort of happen. Apparently after being a horrible person much of his life, Hannah's dad came to Jesus and transformed his life around while suffering in the hospital and whatnot. Now Hannah has to figure out how to deal with all this since he's never been in her life. 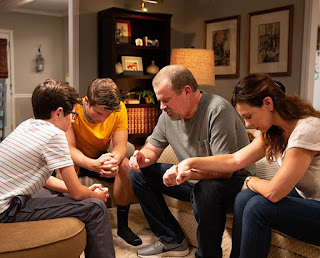 Then the movie finally becomes a religious movie. But in terms of the build up to the religious drama of the movie, it kinda comes out of left field. Hannah is talking to her principle about her being unsure how to react to this revelation that her dad is alive and feels bad for not being there, then the principle says, "Well, even though your father isn't perfect, you have another father who is." Then principle proceeds to give a speech to Hannah about God and Jesus, then commits Hannah to read from Ephesians and take notes as to what those chapters say about who Hannah is. Said principle is allowed to do this because this is a Christian school... one that Hannah is going to for some reason even though apparently she's not even heard of Christianity based on how she reacts to all this? Yeah, I don't know. This didn't make sense to me. And the conversation seemed a bit forced in the first place. But Hannah is a good little girl and studies the Bible, which causes her life to be miraculously changed. And this is where this becomes your typical Kendrick Brothers movie because from this point forward, everything miraculously turns out perfectly for Hannah. She becomes a more inspired runner. She fixes her relationship with her father. She calms down her angry grandmother. And she gives restitution for being a thief earlier in the movie.

The only reason why this kinda works to some degree is that the actress who plays Hannah is a very likable girl. You naturally cheer for her to do well in cross-country, even though the movie itself doesn't do a very good job at being a sports movie. You hope that things work out with her and her family, even though the movie doesn't do a good job of setting up that drama and only half commits to about two minutes of grandmother being extremely upset that they went behind her back. You are inspired by Hannah's speech of who she is after she reads the Bible, even though it didn't make sense for her to randomly walk into the drama class room and give the speech to the whole class, nor did it feel natural for that religious conversation to happen in the first place. And you cheer for her in her final race for the state championship in cross-country, even though by that time the movie had completely forgotten it was a cross-country movie and thus lazily, and rather hilariously threw in a plot device that made it for the stupidest ending I may have ever seen in a sports movie. I wasn't even angry at that, though. I was highly amused and nearing the point of laughter. It wasn't as unintentionally funny as "War Room," but it got pretty close at points, which isn't a good sign.

In summing all this up, this movie fails at being a cohesive movie. Going in, I decided I was going to judge it based on three aspects: how well the filmmaking elements are, how good of a sports movie it is, and how inspiring are the religious messages. It completely fails in all three categories. Yeah, sure, the Kendrick Brothers have done well enough financially to have enough of a budget for the technical aspects of the film to look just fine, but the writing is all over the place, the film has zero direction, and the young girl who plays Hannah is really the only actress who I think did a good job. In regards to it being a sports movie, it's terrible. There's just a bunch of disconnected sequences of Hannah running while Mr. Kendrick and family complain about how awful cross-country is. Then there's a state championship race at the end that comes long after the movie abandoned the whole sports movie thing for some predictable and boring family drama. And as far as the religious stuff in the movie, it just felt forced. If Hannah giving a speech in the drama class causes you to jump out of your chair and shout, "HALLELUJAH!" then maybe you'll like this. It did get an A+ on Cinemascore, so what do I know. Personally I just need more substance and thus I'm giving "Overcomer" a 5/10.
Posted by Adam Droge at 2:18 PM