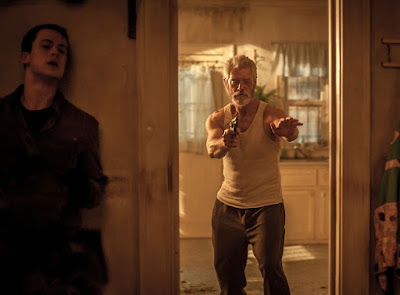 The final weekend of Hollywood's summer is upon us and the late-August/early-September lull has begun. These last couple weeks of August and first couple weeks of September is typically a dead zone for movies because nothing ever seems to do well at the box office and usually the quality of the films that are released are fairly. This is kind of a self-fulfilling prophesy for Hollywood in that due to the reputation of this time period, studios will typically avoid this time period like the plague. If they have a movie on their hands that they think will be good and has a chance of earning money, they'll schedule it for some other time. Thus this period becomes more of a dumping ground for movies where studios will drop movies that they don't have much confidence in. You'll typically get a lot of b-rated action and horror movies in this slot. Thus despite the fact that the trailers for Don't Breathe looked super intriguing and word earlier this year from South by Southwest was positive, I was leary of this. Then the reviews from critics came out as glowingly positive. What? Are we actually getting a GOOD horror movie at the end up August? Yup. Believe it! Don't Breathe is pretty good!

The premise here is a simple one, so this should be a simple review. Simplicity is definitely not a bad thing, though. Sure, I love myself a deep, complex tale that really makes you think about what exactly happened. If done well, that is. Sometimes movies try to be super deep and complex and end up being a giant mess. So the fact that this movie went for simple is good. Here we have three young adults around their early-twenties, I'm guessing, going around robbing houses in order to earn some money to escape their current situations. One of them discovers that there is an old man in the ghetto part of town who has at least $300,000 in cash in his home. If they rob him, they'll have all they need and they won't need to rob anymore. Then they discover that not only he is an old man living by himself, but he's also blind. They think they've scored the jackpot. So they go in one night to grab the money and go. But they quickly discover that they may have made the biggest mistake of their lives as this old man is not to be messed with. In fact he's a crazy psychopath who locks them into the house and chases them around. Thus for most of this movie we as an audience are trapped in this house with these kids as they try to survive this crazy man and someone escape the house.

Essentially we have a heist movie gone wrong with this movie. Heist movies are interesting because if done right they put the audience in a bit of a predicament. Your normal moral compass will usually tell you that robbing a bank or committing a crime is a bad thing. If you see a story of a robbery on the news in real life, you're never going to cheer for the criminals to get away with their crimes. You want them caught. But yet in a heist movie, such as Ocean's Eleven, The Italian Job, and Fast Five, you are cheering for the heist to be a success despite know that what they are doing is wrong. But then you stop and remember that they are doing something bad and you question your own moral compass in wanting them to succeed. If a heist movie pulls that off, then it's a success. If I'm being perfectly honest, Don't Breathe doesn't quite succeed in this, which is a major problem with this movie. This group of kids are just a group of punk kids doing dumb things. They made the bone-headed move to try to rob this dude. They kinda got what they deserved when he chases them down and locks them in the house. I'm not saying I was necessarily on the side of the old man, but this group of kids weren't quite as likable as other heist teams in successful heist movies. 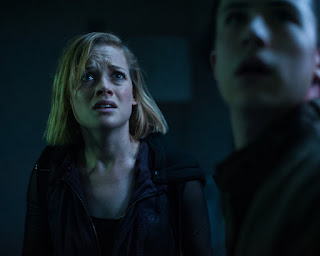 That aside, in terms of pure horror and terror, this movie succeeds in a huge way. Yes, there were some jump scares and there was some gory scenes, but the movie doesn't rely on those aspects in order to successfully scare you. And it also doesn't try to shove down your throat that this was "based on a true story" in order to scare you, like the Conjuring movies. What this does rely on to scare you is pure suspense and terror. And it works. In fact, if I were to grade the intensity of this movie on a scale of 1 to 10, this gets a 10. Normally I'm pretty good at not getting scared during horror movies, but even I was terrified. With Lights Out, despite me enjoying the movie, I was laughing when my whole theater was squirming, jumping, and screaming. This time my theater was more mature because the rating of the movie prevented there being a huge group of teenagers seeing it with me, but I was the one squirming and jumping in my seat. I didn't scream, but I was very uncomfortable. In a good way. The movie is called Don't Breathe and I half think that title is describing the state of the people watching the movie because there were a lot of moments where I refused to breathe. It was quite the exhilarating experience.

A big part of the reason as to why this movie is so successful is because of our crazy old man. I don't want to say too much about him, but this guy is someone straight out of a good Criminal Minds episode. He has a relatable backstory which makes him an interesting character, but the decisions he makes because of that are way over-the-line. Stephen Lang plays the old man and he is so creepy in the way he looks, the way he carries himself, and the way that he is always in the right place. He may be blind, but his other senses are amplified because of that, making it so that he has the upper hand in this situation. Thus even though the kids are the bone-headed ones for breaking into his house, you quickly learn that this is a bad vs. worse situation and I was totally on the side of the kids. Even though they are dumb kids who deserve what they get, our main two are fairly likable. I'm talking about Dylan Minnette and Jane Levy. Dylan Minnette is our big star here. He previously starred in the Goosebumps movie last year, so he gets the opportunity of doing something much different and he shines. I also enjoyed Jane Levy. This was the first role I've seen her in and I was impressed. I wished their characters were written a little better, but they did good with it anyways.

The final thing that I want to dance around a bit is the ending of this movie. There's a lot of ways they could've ended this movie and I honestly don't think the writers were completely settled on which ending they wanted to go with, so they kinda did all of them. There were several moments where I thought the movie was going to end, but it didn't. They eventually had to settle on something because the movie had to end somehow, but the specific ending they went with was the wrong ending in my opinion. That's all I will say about that, though. Overall I was very impressed with this movie. Sure, I think our characters could've been written better. If we're doing a heist movie, I expect to like our characters more than I did in this movie. And as I just said, the ending could've been better. But the majority of this movie is spent in this home and it's an extremely effective horror/thriller. It doesn't rely on a bunch of horror cliches, like jump scares, excessive sexuality and gore, or trying to trick you into thinking this was a "true story." This is just three people stuck in a house with a psychotic, old, blind guy who was super creepy and terrifying. I was legitimately scared while watching this and thus I easily give this a pass. It's a great late-August surprise that I will award an 8/10.
Posted by Adam Droge at 2:25 PM