The Shape of Water Review 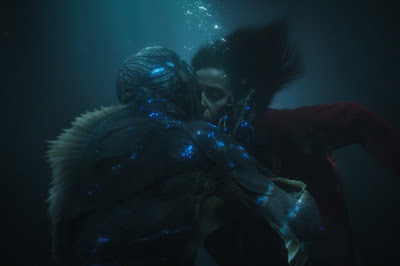 Guillermo del Toro is an interesting filmmaker. He's kind of a guy who just makes what he feels like making and doesn't really have a specific style. He's gone the superhero route with "Hellboy" and "Hellboy II." He lived out his childhood fantasies by making giant monsters fight giant robots in "Pacific Rim." He did "Crimson Peak," which was a gothic horror/romance film. Then of course he is probably most well known for "Pan's Labyrinth," which is another mashup of genres, combining fantasy with drama and war. And those are just the highlights of what he's directed. If you take a look at his producing and writing credits, it seems as if he's had a hand in pretty much everything. So I'm always intrigued by whatever he has up his sleeve next because it's practically impossible to predict where he's going next. Even when you look at his future IMDb credits, he has 10 upcoming films all with giant question marks next to them, meaning I don't know what's going actually happen or not out of all of those. This year's project for him is a little film called "The Shape of Water," which is a rather fascinating tale about a girl and a creature that's getting all kinds of awards buzz right now. It's not only a guaranteed shoe-in for best picture at the Oscars, but it has a decent chance of winning.

I want to give a warning before I go any further. I'm going to talk about this movie. I'm not going to spoil what happens. But I'm going to talk about the premise. Given that I knew practically nothing about the movie going in, if you want to also know very little about the movie, feel free to exit this review and go see it. Just take a quick peak at the content to see if it's one that you'll actually approve of. And if you need more than just my personal recommendation, it has an 8.2 on IMDb, a 93 percent critics score and a 84 percent audience score, and has been nominated for pretty much every major awards ceremony thus far. So in general people are enjoying this film. If you want to dive into a little more depth and you don't mind me giving away what this movie is actually about, then proceed. The very basic premise of this movie centers around this strange, mythical creature that the government and/or military has captured and are doing tests on. One of the janitors is a mute girl played by Sally Hawkins who discovers the creature almost by accident and develops an attachment to it. When she learns that these military people are treating the creature in a very horrible way, she devises a plan to help the creature, thus we get a refreshingly unique journey. 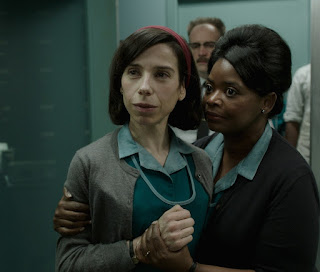 One of the reasons why I love Oscar season so much is that after drowning in major blockbusters all year, we get a whole boatload of these smaller independent/art house films whose main focus is not on giant action sequences or fancy visual effects, but are more focused on storytelling and characters, elements of film that were at the core of filmmaking when filmmaking began because they didn't have the ability to rely solely on special effects to make a movie. Yes, I love myself a good blockbuster film, but I prefer movies that do a good job at telling a good story and developing good characters. That's exactly what "The Shape of Water" is at it's core. It's a fantastic character piece from many angles. We have Sally Hawkins playing a mute janitor who feels lost in the world. We have this creature who is trapped in an environment that isn't good for him. We have Sally Hawkins' neighbor played by Richard Jenkins who is an older gentleman with few friends and a struggling art career. We have the "evil" military people led by Michael Shannon who have no feelings for this creature. We have the doctor played by Michael Stuhlbarg who doesn't want the creature hurt and we have Sally Hawkins' best friend played by Octavia Spencer who is there to support her.

All of these arcs come together beautiful in what is truly an acting showcase. That there is definitely the best part of this film. All the previously mentioned actors give worthy enough performances to be nominated in the acting categories. Sally Hawkins is the lead in the movie and the definite standout. She did a phenomenal job of portraying this complex, troubled individual without saying a word. She signed her way through most of the movie when she had to communicate. Rather aggressively in some sequences. But the best moments were when she was by herself or with the creature and had to express everything required of her through body language. I bought it. It was one of the most emotional performances of the year. Next up I would actually say is Michael Shannon. I think he had a lot of fun playing the main antagonist of the film. The scenes with him in it were rather menacing and intense. But then he would spend time with his wife and kids, showing a completely different side of him. The others all gave solid supporting roles. Richard Jenkins is getting most of the buzz outside Sally Hawkins and I'm fine with that, but I also enjoyed the performances of  Octavia Spencer and Michael Stuhlbarg. Even Doug Jones as the creature was great.

I mentioned earlier that the movie felt refreshingly unique as I was watching. When the movie finished and I was leaving the theater, I began to think of what other movies this reminded me of. This is where we get into semi-spoilers because this needs to be mentioned. The movie that I first thought of was "Beauty and the Beast." Because, yeah, this is a romance film. Between Sally Hawkins and this creature. It's sweet and romantic, yet a bit weird. With "Beauty and the Beast," the romance is pure and innocent in both the animated and the live action as to not cross over into awkward territory. Plus Beast is really a human transformed into a beast, so it's not that weird. But the creature in "The Shape of Water" is not a human. Not really anyways. He's more like an alien from space with human like qualities. But still not human. I personally think the movie could've been just as effective if Sally Hawkins established a connection with the creature like one does with a pet or another stray animal. I didn't need the romantic relationship between her and the creature, especially not when it got a little more awkward than was necessary. I mean, it fit in the way that both were lost in the world and couldn't speak, but it was a bit much. 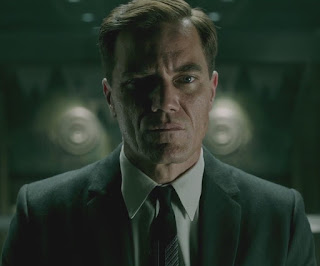 Then once I got to thinking of the "Beauty and the Beast" comparison, suddenly a lot of other movies came to my mind. "E.T." "Creature from the Black Lagoon." "King Kong." Pretty much any movie with a monster or alien that the government, military or the general population think is bad and evil, but in reality has a different side to it that a character in the movie comes to respect and befriend (but usually not fall in love with...). Yeah, the more I think about the movie, the more I realize how it's actually not as unique as I initially felt while watching. There's even been commentary from the internet about how this creature looks an awful lot like Abe Sapien from "Hellboy," another Guillermo del Toro movie, both characters being played by Doug Jones. Suddenly the internet is wondering if this could be a prequel to "Hellboy"? I don't think so. But it wouldn't be the first time a director has secretly done something like that this year. Back on track, though. Despite the movie not being super original, I still think it's executed well. Sometimes you can get away with having a similar premise to another movie if the execution is on point and that's the exact case with "The Shape of Water." Guillermo del Toro has crafted a well-designed piece of art.

I suppose one could say that this movie is a disappointing one if you walk in expecting it to be the brilliant masterpiece that have caused many critics to knight it as the best movie of the year. But that's not how I approach these Oscar films. It's unfair to expect any movie to be a perfect masterpiece and it's certainly unfair to come down on it so harshly if it doesn't live up to those expectations. I go into these movies expecting a good, solid movie. If I come away with a masterpiece, then so much the better. If I come away with simply a good movie, I'm satisfied with that, too. "The Shape of Water" is a good movie. It's a solid character piece with deep themes that will resonate with a lot of people. I don't know if I completely loved the romance and I think there were a few moments where Guillermo del Toro could've held back a bit more, but I also didn't walk out completely appalled or angry. This movie is going to get a lot of Oscar nominations and it certainly deserves it, especially when it comes to the visual effects regarding this creature. The Oscars have seemed a bit hesitant to accept motion capture, which I think is frustrating and I'm sure Andy Serkis feels the same way. But it's whatever. If you like Guillermo, give this a watch. I'll give "The Shape of Water" an 8/10.
Posted by Adam Droge at 7:06 PM