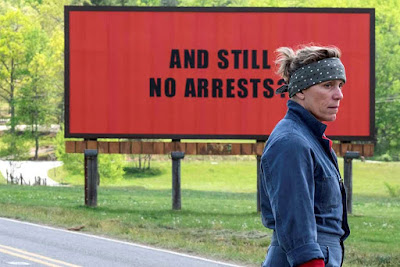 How about that for a movie title? If you aren't big into the awards buzz like I am, your reaction to this review title or perhaps seeing this movie poster at your local theater may have been the same reaction that I had several months ago when I first heard of this: "What the heck? That's an interesting title for a movie." It definitely grabs your attention due to both the length and the uniqueness of the title. At least it did for me, which is why I've had it on my radar ever since. When it started actually being screened, that's when it definitely had my attention. It won the People's Choice Award at the Toronto International Film Festival, of which the previous five winners have all gone on to be Best Picture nominees at the Oscars, those five movies being "La La Land," "Room," "The Imitation Game," "12 Years a Slave" and "Silver Linings Playbook." Since that win, it's gone on to get a handful of nominations for each major awards ceremonies, including most recently getting six Golden Globe nominations. With all that in mind and given that there's no clear front-runner at the Oscars right now, I confidently predict that this is one of perhaps three or four movies that has a good shot at WINNING Best Picture at the Oscars. And I personally feel that this would be a well-deserved win.

With how descriptive that title is, the general premise of this movie a bit self-explanatory. It centers around three billboard that are put up outside Ebbing, Missouri. Shocker, I know. And where is Ebbing, Missouri? Well, that's actually a fictional town, as is the story that goes along with this. No, this movie isn't based on a true story of events that took place near a town called Ebbing, Missouri, but it feels real enough once you know what's written on these billboards. "Raped while dying," "And Still No Arrests" and "How come, Chief Willoughby?" are the messages on the billboards. Yeah. While this specific story is fictional, the themes discussed in this movie are very real to a lot of people around the world. Frances McDormand plays a rightfully upset lady named Mildred who, according to her words in the movie, feels that the police are too busy killing black people to focus on what's really important, like finding the person who abducted and killed her teenage daughter several months back. She feels that these actions are a good way of getting their attention so that they can refocus their efforts. But of course Chief Willoughby, played by Woody Harrelson, isn't happy about this, so we have a movie centered around Mildred vs. the police with the town taking their sides. 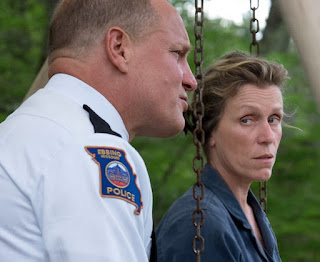 My biggest concern going into this movie was the politics behind the movie. Police around the country have been under very high scrutiny for very good reasons over the last several years, sparking countless riots and protests surrounding the mistreatment and unauthorized shootings by police, especially when it comes to black people, which sparked the Black Lives Matter movement. With the description that I gave you in this previous paragraph in mind, it seemed to me like this was going to be a movie that was going to come out firing at all cylinders against police and how corrupt they are. If that was the case, it would make sense as to why this movie is getting such high praise because critics and awards voters alike love powerful, relevant films delving into important subject matter. What really surprised me here is that this is not really the case. Instead of being a fiery, one-sided movie attacking police, this is a more objective, well-rounded movie that tells this story from all angles. The moral of the story seems to be that when things like this happen, life really sucks for everyone involved. The movie presents a sense of unfortunate awkwardness with a lot of grey area on both sides as we dive deeper and deeper.

In showing this, we start from Mildred's perspective and you immediately feel bad for her. I can't imagine what it would feel like to have your teenage daughter kidnapped, raped and murdered. Even though her actions are a bit questionable, all she wants is justice and a sense of finality to help her have peace regarding this whole situation. That's an easy side to jump on and support, thus when she starts attacking the police, you're immediately on her side in this attack. How dare the police not doing anything, right? And you feel that way until you're introduced to Chief Willoughby. There's a lot of things going on with him that I won't reveal, but the gist of everything is that he's a nice, honest person who is doing his absolute best as police chief to provide justice. He represents the type of police officer that is easy to love and care about. Yes, despite how much fire police have been under recently, there are a lot of officers that are fantastic individuals who are great at doing their job. In this movie, Chief Willoughby represents those officers. Thus instead of being a one-sided attack towards police, you're able to see things equally from both perspectives. You understand why Mildred makes her decisions and you also understand why Chief Willoughby is upset at those decisions.

The movie gets even more layered than that when we dive into all of our side characters. We have Lucas Hedges playing Mildred's son. He's equally upset at the fact that his sister is dead, but he doesn't like what his mom is doing to solve everything, making for a very intense family situation. We have Caleb Landry Jones playing the kid at the office who rented the billboards to Mildred who now is thrown into the middle of this fight when he was just trying to do his job. We have plenty of other people who do support Mildred in what she's doing. And we have Sam Rockwell as Officer Dixon who represents the opposite side of the police force as Chief Willoughby. Yes, there are a lot of police officers that I do feel bad for because they are being unfairly judged and looked down up due to the actions of others when they did absolutely nothing wrong. But then you have those officers that are giving the rest a bad name. That's what Sam Rockwell is here for. He's the bad cop that you really want to hate during this movie with a lot of things that he says and does. Yet his arc in the movie is quite fascinating, proving yet again that you'd be wrong to paint everything as a complete black and white picture. There's a lot of gray in life that we sometimes choose to overlook. 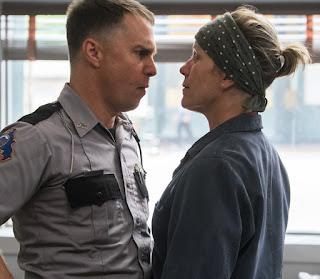 As such, this movie becomes a very layered, complex film that I found to be absolutely fascinating. You can look into every one of these actors and characters and do an in-depth analysis about who they are, what they represent and why they made the choices they made. It's honestly a very interesting character study. Carrying this movie forward is this fantastic ensemble with top-notch acting all around. The absolute phenom from the group is Frances McDormand who gives one of the best acting performances in recent memory. I'm not going to declare her my personal favorite just to be fair because there are several of the major players in this best actress race that I have not seen, but I walked out of the theater thinking that we should just give her that trophy because it is very well deserved. As far as who else deserves nominations, Sam Rockwell is the one who is getting all the love and, when push comes to shove, I would probably agree with that. But I also think we got great performances from Woody Harrelson, Lucas Hedges, Caleb Landry Jones and even Abbie Cornish who I think would be worthy candidates. It's one of those situations where I'd say giving this a Best Ensemble Cast nomination would be most fitting, but that category doesn't exist at the Oscars.

The other thing that really makes this a unique movie is the dark comedy. You wouldn't think that a movie about rape, murder and police brutality would be funny, or should be funny, but this movie had me dying of laughter throughout. My whole screening was even cracking up. This was mostly due to Frances McDormand's character. She is such a crazy, intense lady that she does and says so many shocking things that will just have you rolling over. Yet the movie does a perfect job of balancing that humor with the intense, dark drama. One moment you are busting up with laughter and often the very next moment you are punched in the gut with something that comes out of nowhere that cuts deep to the core. This is a very tricky balance to find in movies. Most of the time when I'm watching a very dark film, having comedy flying out of the gate left and right would feel tonally inconsistent. I don't know how "Three Billboards" did it or why it works so well, but it does. And it's one of those situations where you have to experience it for yourself to know why. Because of this, the other nomination that I desperately hope this gets at the Oscars is a best screenplay nod for Martin McDonagh. A directing nod would be cool, too. But a screenplay nod is a must.

The biggest complaint that I have for "Three Billboards" is that they kinda wrote themselves into a corner. When you start the movie, you have the introduction with Mildred putting up her billboards and the town going into chaos because of it and Chief Willoughby approaching Mildred to try to solve this issue, but then after that you wonder where it's going to go for the next 90-100 minutes as it has nearly a two hour run time. The journey the movie takes you on is a rather crazy one. Believe me, I've only scratched the surface when it comes to telling you about this movie. There are so many twists and turns that I didn't see coming. Every time you think you know what's going to happen next, you get a pretty strong curveball, thus making for a great movie that is impossible to predict. The reason I say they wrote themselves into a corner is because after so many twists and turns, I'm not sure they quite knew how to end the movie. With what they did do, I felt slightly unsatisfied and I really want to say why, but I'm going to leave that a mystery in this review. But outside that, I was completely engrossed with this movie. It's a crazy ride that is absolutely hilarious, yet at the same time a dark tale that shines a light on the unfortunate honesty of life. I'm awarding the movie a 9/10.
Posted by Adam Droge at 10:00 PM