The House with a Clock in Its Walls Review 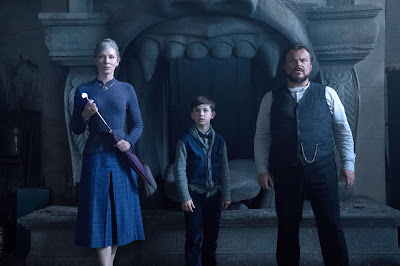 In my most recent review, I discussed how surprised I was when I saw that Paul Feig was directing "A Simple Favor," which is a more dark and twisted thriller with a touch of comedy scattered in. This was surprising because Paul Feig has only directed straight-up comedies before this. However, what surprised me even more was when I first saw the trailer to this movie, "The House with a Clock in Its Walls." Why? Because when I was doing my yearly preview back in January, I noticed that Eli Roth had two movies coming out this year. Immediately, and without question, I put both of those movies into my bad movies section simply because Eli Roth is the most tasteless, disgusting director I knew. Prior to this year, all of his movies are what you call torture porn, or spatter films, where the purpose is to watch the graphic mutilations of the human body. "Hostel" and its sequels are the most well known of these that Roth directed, but the one movie of his that I saw, for some strange reason, was "The Green Inferno," a cannibal horror film that is as disgusting as it sounds. In learning that all his movies were like that, I had zero desire to ever see an Eli Roth film again. Thus is why I confidently put both "Death Wish" and "House with a Clock" on my bad movies list.

"Death Wish" came and went earlier this year. It had Roth's typical R-rating and looked super graphic. I don't know if it was as disgusting as his previous films, but it got awful reviews, so I didn't bother with it. But then the trailer for "House with a Clock" dropped and I was beyond stunned. At that point, the rating hadn't been released, but the trailer made it look like it was going to be a kids film starring Jack Black and Cate Blanchett that reminded me a lot of that "Goosebumps" movie from the other year, especially since both movies starred Jack Black. In fact, I think I saw the trailer in the theaters for the first time and I thought they were advertising "Goosebumps 2," which gets released here later this month. But nope. It was this Eli Roth film. And I just couldn't wrap my head around the fact that he was going from torture porn to kids film. And yea, when the rating was released, it was indeed a PG film. As it turns out, this is a series of kids books that began in 1973 centering around the lead boy named Lewis Barnavelt. The series was started by author John Bellairs, with Brad Strickland taking over in the 1990's. There are now 12 of these books, with the most recent one, "The Sign of the Sinister Sorcerer," coming out in 2008. 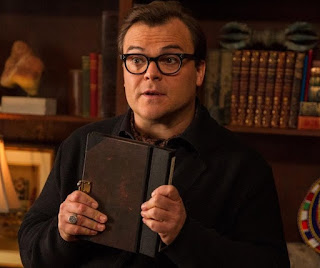 Given that I didn't even know these series of books existed until I did my research on the movie while writing my September movie preview, I obviously haven't read any of them. If you or your kids have read them, I would love to hear how the book and the movie compares. I thought it was a pretty fun adventure with a surprising amount of heart and suspense added in. As the story goes, Lewis has recently lost his parents and is thus forced to move in with his uncle Jonathan, played by Jack Black. Lewis' big desire is to simply live a normal life and he really misses his parents, but he's in for anything but normal in this new life of his as there's all sorts of magical happenings in this new house. The furniture is alive, the paintings are constantly changing, strange creatures are looming around, and, as the title suggests, there is a mysteriously ticking clock somewhere in the walls of the house that has been driving Jack Black's character insane. And yes, as it turns out, Jack Black is a warlock. And Cate Blanchett, Jack Black's neighbor, is a witch. Thus Lewis becomes interested in learning how to do magic, making him an American Harry Potter of sorts. Or maybe Harry Potter is a British Lewis Barnavelt, since "House with a Clock" came first.

As far as a recommendation goes, this is honestly a tough one. This is a movie that's meant for kids, but it's also a movie that pushes the boundaries of what's appropriate in a kids movie. First and foremost, this movie does have a bit of language. I had talked to some people prior to the movie being released who were worried about it being appropriate for their kids due to the language, so I counted. I got to about six or seven curse words and there could be a few more as Jack Black's character curses probably more than he should. I don't know if that number of curse words is alleviating to you or worrisome, but that's what I came up with, so use that as you will. Perhaps more worrisome is level of suspense that exists. There were a lot of moments, especially in the second half of the film, that put me on the edge of my seat. And I'm an adult who is used to watching a lot of horror films. If you have kids who are extra sensitive to scary images and sequences, this might be a movie to skip, especially when it comes to young children, because this movie might legitimately traumatize them. I'd recommend keeping your young kids far away from this and only take your older kids if they are interested. Perhaps the 10-12 year-old range.

Yet at the same time, those of us who are older can look back to our childhood and recollect that it's these style of movies that we remember most when it comes to Halloween classics. Movies that are directed towards kids and families, but are a little more on the intense side, causing some to say that they probably aren't kids movies. I immediately thought of "Hocus Pocus," "Beetlejuice," "Gremlins" and "Poltergeist," the latter two being extremely influential in bringing about the PG-13 rating. Some of my other friends on Facebook came up with "Something Wicked This Way Comes," "The Watcher in the Woods," "The Witches," "Tower of Terror" and "Little Shop of Horrors" as other movies that traumatized them as a child. But yet despite claiming that these movies gave us nightmares growing, they're often now our favorite Halloween movies as adults because of the experience. So is it safe to say that kids like being scared and it could be good for them? That discussion is one that could potentially be super interesting. If the answer is yes, then "House with a Clock" comes in as highly recommended because it fits in with all of those movies mentioned because it's much more than a silly little adventure that you'll forget 10 minutes after leaving. 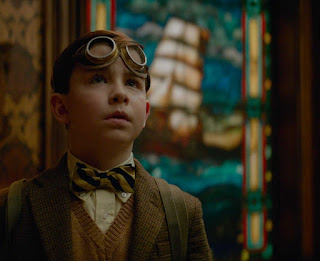 Throwing all of that aside and focusing specifically on my personal experience, the movie ended up being exactly what I thought it was going to be when I first watched the trailer. A movie that's awfully similar to the "Goosebumps" movie from the other year. Perhaps that's a movie to consider if you're thinking about taking your kids to see this. Show them that movie at home if they haven't seen it. If they like it, then take them to see "House with a Clock." If that movie is too much, then save your money on this one and go see something like "Smallfoot" instead. Or maybe be a bit patient and wait for "The Grinch" or "Ralph Breaks the Internet" in November. Personally I enjoyed "Goosebumps." I read those books as kids and they were fun books that pushed the boundaries of what was appropriate for a kids book. But the level of suspense in them was at the perfect level. Not too terrifying, but terrifying enough to give me a good rush and make me want more. The movie did that feeling justice, even though the CGI was a bit weak. With "House with a Clock," the mystery and suspense was also at the right level. The acting was fantastic. And the CGI was much better than "Goosebumps" with all the creatures and supernatural occurrences.

I think the biggest complaints that I have were that it felt a bit juvenile at times. There were moments where it slammed the brakes and slowed down for too long, thus the pacing wasn't always perfect as it tried to not be too intense. And there were way too many poop jokes, mostly involving a magical tree in the shape of an animal. I don't know why those were included. None of them were funny to me. But maybe they'll make the young kids that do end up seeing the movie get a good laugh. But when push comes to shove, this was a fun Halloween adventure that makes me give mad props to Eli Roth for not only stepping out of his wheelhouse, but also doing a very good job. Or maybe I should give at least an equal number of props to Eric Kripke, creator of the CW show "Supernatural," who wrote the script and helped produce the movie. On Twitter he said that the original book inspired him to create "Supernatural," so he was super excited to help bring the book to the big screen. And suddenly it all makes sense. If you like "Supernatural," chances are you might like "House with a Clock." And yes, there are some fun "Supernatural" Easter eggs that I picked up on even before I realized Kripke was involved. On that note, I'm going to give this movie an 8/10.
Posted by Adam Droge at 3:20 PM