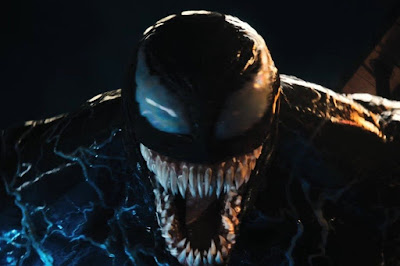 It's been quite the interesting journey for Sony with their Spider-Man universe. Along with Fox's "X-Men," Sony was instrumental in reviving the superhero movie genre with Sam Raimi's "Spider-Man" in 2002. And they were successful in keeping their positive momentum going... for approximately one more movie. "Spider-Man 2" in 2004 is nearly universally praised as one of the best superhero movies ever made. But that's as far as the positive buzz goes. "Spider-Man 3" did fine at the box office, but was so mixed in terms of reaction that it ended up being a franchise killer for Sony with that Spider-Man universe as Sony opted for the reboot option instead of "Spider-Man 4." Thus the "Amazing Spider-Man" movies were born. Those two movies are ones that I will still defend to this day, but apparently I'm in the minority there as "The Amazing Spider-Man 2" was also a franchise killer. Sony then gave in and struck a deal with Marvel to let them use Spider-Man in the MCU as long as Marvel helped them make a good movie. And that's how we got "Spider-Man: Homecoming" and the upcoming "Spider-Man: Far Far Away." But since Sony is still stubborn in having their own cinematic universe, we now have the Spider-man-less "Venom" to kick that off. A good idea?

I suppose only time will tell if this experiment works out, but actually it's off to a good start. In my recent October movie preview, I predicted that "Venom" would earn around $50-55 million on its opening weekend. That was based off of the presumption that the range was $50-70 million, which is where most box office experts pegged it at. I thought the horrible critic reviews would hurt it and cause it to hit the low end of things. But nope. The movie ended up being critic-proof by exploding to $80.2 million. That puts it right in line with plenty of other superhero movies that opened in the $80 million range, suggesting a final domestic total of around $180-220 million, depending on how it holds in the coming weeks. With a $100 million budget, as well as overseas totals to add to its domestic total, Sony is going to pull off a win here, meaning a "Venom 2" has probably already been greenlit, which is actually exciting given the mid-credits scene that you NEED to stay for. As I already mentioned, the critics panned this movie, penalizing it with a 29 percent score on Rotten Tomatoes. But audience were much more forgiving, giving it an 89 percent audience score as well as a respectable B+ Cinemascore, leaving me really confused as to what to expect going in. 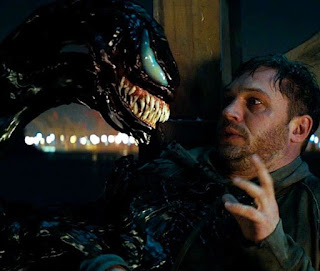 Because of my confusion, I ended up going in with more of a blank slate than I initially thought I would. In addition to the audiences liking it, several of the critics who hated it compared it to the "Amazing Spider-Man" movies, which didn't help their case in my view because I like those movies. If this movie had the tone and feel of those two movies, I'd be totally down. Much to my personal relief, that's actually kinda the case. The overall feel and look of "Venom" is much darker and more methodical than the Raimi "Spider-Man" movies as well as "Spider-Man: Homecoming." Those have more of a upbeat, lighthearted vibe to them that's very much different than "Venom." I could see some people complaining that Sony has learned nothing from recent events, but I managed to be pleased with the result. In fact, if Sony ever lets Venom crossover with Spider-Man, which I certainly hope will be the case, it almost feels more appropriate if Andrew Garfield's Spider-Man shows up instead of Tom Holland's Spider-Man. The Andrew Garfield/Tom Hardy show-off/team-up feels like it would go together quite well. Both characters even have a similar sense of humor that you don't fully expect going in. It catches you off guard, but makes you laugh.

Alas, though, that'll never be the case and I suppose I can accept Tom Holland's Spider-Man jumping in and facing Tom Hardy's Venom, even though "Spider-Man: Homecoming" and "Venom" have two drastically different feels to them. If Sony ever lets that happen, of course. But until then, let's talk about what we actually have here and that is essentially a character study on Eddie Brock, the alter-ego of Venom. Tom Hardy absolutely nails this character. He does great as the questionable reporter who doesn't quite have a strong sense of moral values, but is far from being a horrible human being. You like him and you care for him even though he's not always acting in ways that you agree with. Which is exactly what an anti-hero is supposed to be like. Then when the floor completely crumbles beneath him, causing his life to collapse, Tom Hardy also does a great job of playing the broken individual who becomes a lot less likable and more of a jerk. But then when he accidentally stumbles on the symbiote, you can definitely tell that he's still a good human being with boundaries when Venom wants to go around killing everyone and eating everything because Eddie Brock won't allow that. He's broken and he's scarred, but he refuses to let Venom turn him into a maniac.

This is where your typical Venom lore departs from the comic book origins. His actual origin is more along the lines of what "Spider-Man 3" attempted to do with the symbiote initially going to Peter Parker before then accepting Eddie Brock as its host. But since we're not doing Spider-Man in this movie, the writers had to be more creative in their approach, so they settled with Eddie Brock sneaking into the lab of Riz Ahmed's Carlton Drake, who is the head scientist secretly harvesting all of the symbiotes that showed up from space. Eddie Brock gets there because one of Drake's people becomes extremely uncomfortable with the situation and convinces Eddie Brock to go with her at night to see what is happened at this lab so that he, as a former reporter, can expose Drake. And that of course leads to the Venom symbiote discovering Eddie Brock and infesting him like a parasite. This is by far the best part of the movie as Eddie tries super hard to figure out what exactly is happened to him. Eventually he starts hearing voices before Venom officially shows up, which sparks a lot of Gollum-like banter as Eddie seems to be arguing with himself as no one else can hear Venom unless Venom chooses to show up or if Eddie allows him to take over. 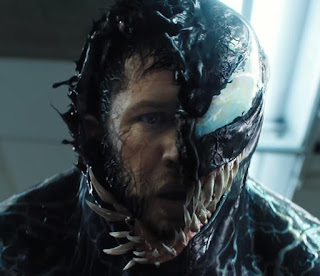 I will say that, even though I enjoyed watching the progression of Eddie Brock thanks to Tom Hardy's excellent performance, this "Venom" movie takes a long time to, well, "Venom." There is a ton of setup in this movie, both when it comes to Eddie Brock's character as well as Carlton Drake's secret lab, as this movie chooses to slowly and carefully introduce both Eddie Brock as well as all of the symbiotes. Because, yeah, there's a lot of them. And of course each of the symbiotes shown is a potential "Venom" sequel if you're knowledgeable enough to know which symbiote belongs to which "Venom" characters, thus giving us an "Amazing Spider-Man 2" vibe wherein the movie gives plenty of Easter eggs for future movies. And while all this setup is necessary to establish this current "Venom" lore, it means less time with Venom in this initial movie and even less time with the final conflict. I don't know what point in the movie we were at before Venom finally took, being more than just a voice in Tom Hardy's head or teases of the character, but it was a while. I think there could've been a few more revisions of the script that could help us get to the point of the movie a bit faster instead of drawing everything out as if no one on Earth has heard of Venom.

Speaking of script revisions, the overall conflict is pretty weak. I don't want to jump on the bandwagon of saying Riz Ahmed's Carlton Drake is a bad villain or that Riz Ahmed was miscast. I just think the writing in the movie didn't do him any favors. Riz Ahmed himself did an excellent job and could've been a fantastic villain, but we have the classic critique here that he did the best he could with what was given to him, but sadly wasn't given much to work with. Given that we've had so many superhero movies of late, I pay specific attention to the motivation of the villain and I didn't really get much of that from Carlton Drake. All I could pick up was that he became obsessed with making the symbiotes connect with their proper human vessel, because that's necessary for the symbiotes to survive as they can't simply connect with any human or animal. But I don't know why he was doing that or what his ultimate goal was. When he himself became a symbiote host and transformed into Riot, I'm not sure what I thought he was accomplishing. Riot was actually super cool, but the Riot symbiote wasn't given enough screen time for me to be able overcome the fact that Carlton Drake was a poorly written villain that ends up being super forgettable.

In summary, I can conclude simply that "Venom" suffers from what I have coined as origin-story-itis. My two biggest complaints when it comes to origin stories are that many of them spend too much time setting up the hero while not having enough time to dive into the meat of the movie and the movie not having an interesting villain because you can't spend your first movie on the character's biggest arch-rival. And that's exactly what happens here. Tom Hardy is great and I loved the banter back and forth between Eddie Brock and Venom, as well as their progression in becoming a compatible team. But there was too much time spent setting everything up, thus not leaving enough time for an interesting movie around the two of them. And what we did setup was a pretty forgettable villain. The battle between Venom and Riot was pretty cool, but it was super short, almost like it was an afterthought of the film, thrown in there out of necessity rather than being properly setup and given enough time to progress. All that said, there's enough in this movie for you to enjoy as it's not nearly as bad as many of claimed and I do think this new Venom universe provides a lot of promise for the future with the likes of Carnage and hopefully Spider-Man, so I'll give the movie a 7/10.

P.S. - In addition to me recommending you stay for the mid-credits scene that teases the sequel, I'd also highly recommend you stay for the post-credits scene, which is a sneak peak of the upcoming Sony movie "Spider-Man: Into the Spider-Verse." We get to see a 3-5 minute scene from the beginning of that movie that's legitimately excellent.

P.P.S. - If you've somehow managed to avoid the trailers of this movie, DON'T WATCH THEM. The whole movie is in the trailers, including the final battle, the final scene and the final line. Sony really needs to work on this. As a general rule, I try to avoid saying that a trailer can ruin a movie because I don't think that's fair to the filmmakers who often have no say in how the studio puts together the trailers, but in hindsight these trailers were awful.
Posted by Adam Droge at 7:21 PM